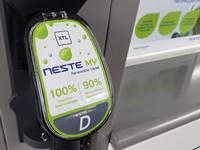 In the United States, HVO production is breaking records year after year and now accounts for a significant percentage of diesel consumption, usually blended with fossil diesel. The drop caused by the Covid-19 pandemic is countered by demand driven by the policies of the Federal Renewable Fuel Standard (RFS2), California's Low Carbon Fuel Standard (LCFS) and the reintroduced Blenders Tax Credit.

For the next few years, HVO use in the US is expected to increase, the main driver of this growth is the quadrupling of HVO production stemming from a wave of investments in production capacity, including the conversion of several fossil fuel refineries. Tighter annual LCFS carbon emissions requirements in California and Oregon will stimulate demand for low-carbon HVO from waste feedstocks and residues, but increased production will likely require new policy to continue to stimulate demand created by the RFS2 after its expiration in 2022.

The U.S. West Coast is an example of growing HVO use, in part due to California's ambitious CO2 emissions savings targets and Oregon's Clean Fuels Program, which have encouraged an increasing number of public and private companies to use renewable diesel. In addition, there is already a network of HVO100 outlets in these states that is constantly expanding to provide more access and options for operators seeking renewable diesel. In the near future, Washington State and several northeastern states are expected to follow suit with similar programs to help reduce carbon emissions and expand renewable diesel consumption.

In the United States, there are a few gas stations already offering HVO100 for sale to the general public, a network of supply points that is growing rapidly and is likely to reach the entire country in the near future.

Map of Stations with HVO in USA

News about stations with HVO in USA

How to refuel HVO in USA