stations in india with

Hydrogen Stations in india in

Hydrogen Stations in india in 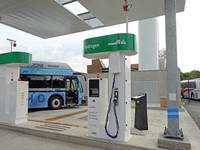 As energy demand from the automotive and industrial sectors continues to grow worldwide, conventional fossil fuels will no longer be able to meet the growing need for clean and reliable energy. Hydrogen has emerged internationally as a multi-sectoral solution. From aviation and shipping to long-distance road transport, hydrogen is an environmentally friendly alternative to power heavy-duty vehicles and energy-intensive industries. Due to the current energy crisis, environmental degradation and climate change impacts caused by fossil fuels, India is exploring clean and efficient alternatives to fossil fuels, including the use of fuel cell technology.

The use of hydrogen as an automotive fuel has gained momentum in India. India's Ministry of New and Renewable Energy (MNRE) has supported several hydrogen projects in academic institutions, research organisations and industry for its development. Examples of projects include the development of hydrogen-fuelled internal combustion engines to power two- and three-wheelers and minibuses, as well as the establishment of two hydrogen refuelling stations at Indian Oil's R&D Centre in Faridabad and at the National Institute of Solar Energy in Gurugram. From February 2020, the MNRE has partnered with NTPC Ltd, an Indian energy conglomerate, to propose the implementation of a fuel cell bus pilot project.

With India's rapid population growth and economic development, the country is facing major environmental issues affecting its population. Fuel cell and hydrogen technology is emerging as a solution because of its clean operation and versatility of application. India's funding of major fuel cell and hydrogen technology developments will help hydrogen become part of the fundamental methods of decarbonisation, from reducing emissions from obvious factors such as transport

There are currently 2 retail refuelling stations in India.

November 30, 2021. Indian Oil Corporation (IOCL) is making strong moves to enter the production of alternative fuels. The major oil trading company (OMC), for example, is increasing its capabilities to supply hydrogen. Speaking at a virtual conclave organized by our sister publication Autocar Professional on 'Meeting Emissions Challenges', Indian Oil President Shrikant Madhav Vaidya said: "Indian Oil is committed to the use of hydrogen and we are doing a lot of research on this particular aspect. ." He added that hydrogen use is expected to increase "in a big way."

Commenting on Indian Oil's plans for hydrogen production, Vaidya said: “Who better than the oil industry to talk about hydrogen? We are the largest individual producers of hydrogen.” He continued: “I am very happy to share that we are going to operate almost 50 hydrogen fuel cell buses from two sides: from Panipat Refinery (Haryana) and Gujarat Refinery. The work at the end of the refinery has already started and we have invested to make a fuel purity of 99.5 INI”. Vaidya said the fuel cell buses will be launched in October or November this year.

How is hydrogen refueling done in india?