stations in sweden with

Hydrogen Stations in sweden in

Hydrogen Stations in sweden in 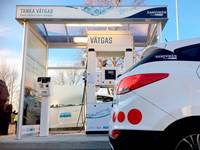 The network of refuelling stations offering hydrogen for refuelling vehicles in Sweden is far from developed. Danish company Everfuel now says it wants to build 15 new stations in Sweden by the end of 2023, eight of which will be built as part of the EU co-funded Nordic Hydrogen Corridor project approved in 2017, which also involves Statkraft, Toyota, Hyundai and Vätgas Sverige.

The project was supposed to allow the stations to be operational last year, but the project has been delayed. Everfuel wants to build the remaining seven stations outside the Corridor project, either by itself or together with other interested parties.

As a sample, Everfuel plans to build most of the stations in southern Sweden and Stockholm. The northernmost planned filling station is in Gimo, north of Uppsala. Everfuel also plans to build stations in Denmark and Norway. The ambition is to build a total of 40-50 stations so that one third of Scandinavia's population will not have to travel more than 15 kilometres to the nearest hydrogen station by 2023, provided they live in what Everfuel calls a "selected corridor". This is also said to be why the stations are located in the more densely populated south.

The stations will offer refuelling to cars as well as trucks and buses, which use different pressures in their tanks. For cars, 700 bar is the norm, while trucks and buses use a lower pressure of 350 bar. Prices have not yet been set, but hydrogen is already competitive with diesel.

In Sweden there are currently 5 hydrogen filling stations with retail sales.

The project will make green hydrogen available to residents, businesses and through traffic in the municipality and is based on a broader synergistic collaboration with Strandmöllen AB, Ljungby Energi AB and the municipality of Ljungby.

How is hydrogen refueling done in sweden?