stations in USA with

Hydrogen Stations in USA in

Hydrogen Stations in USA in 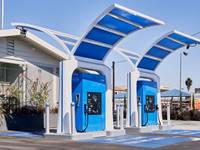 Almost all the fuel cell vehicles in the US are in CALIFORNIA . There are a handful in Hawaii. This is because there is no hydrogen fueling network anywhere in the US outside CALIFORNIA and the Aloha State. More are under development in the northeastern US and more are expected in the Pacific Northwest.

Most stations obtain pressurised gaseous hydrogen, which relies on compressor stations and a network of trucks to deliver the H2. Many future stations will supply liquid hydrogen, the supply of which is larger and more reliable. As more stations are built, the availability of hydrogen for your fuel cell vehicle obviously increases.

The US government says the goal is 200 hydrogen stations in CALIFORNIA by 2025. By 2030, a total of 1,000 stations in the state is "envisioned". Once refuelling stations are added in other states, the number of fuel cell vehicles will grow nationwide.

Approximately 80% of hydrogen refuelling stations now have a capacity of 150 to 200 kilograms of hydrogen. A typical refuelling requires perhaps 3 kilograms or a little more. So a typical station can fill between 50 and 67 hydrogen fuel cell cars before running out of H2. As future stations will use liquid rather than gaseous hydrogen, they will have capacities of 500 to 800 kg, i.e. enough for 167 to 267 cars. Some stations could have a capacity of 1,200 kg, or 400 cars.

There are currently 107 hydrogen fueling stations in the United States that supply hydrogen for sale to the public and other supply points for private fleets.

August 18, 2021. Nikola has secured a $2 million grant from the US Department of Energy to study autonomous refueling at hydrogen stations, the manufacturer announced Thursday. This type of refueling would minimize labor costs and reduce the need for equipment maintenance.

Autonomous refueling should enable a fuel cell electric heavy-duty truck to refuel in less than 20 minutes. Hydrogen is seen as a quick way to refuel trucks, as opposed to recharging batteries, which can take up to five hours.

Autonomous refueling would mean eliminating the human work required to pick up a hydrogen bomb and insert the nozzle into the truck's tank. The process could be done with a robotic arm, like the one used by Robofuel.

How is hydrogen refueling done in USA?