Installation of the kit to consume propane

Although it is commonly called "transformation of a car to propane" the installation in a vehicle is done maintaining the fuel system of gasoline, adding the propane system, so that it is always possible to work alternately with one or another fuel (gasoline and propane, for this reason they are also called "Bi-Fuel")

The installation of the entire system necessary to consume propane as fuel in our car is simple, since the amount of components installed in the car is low, so the chances of breakdowns or malfunction are rare. < / p>

The equipment may vary according to the installation required, but in general they have the following elements common to all types:

Elements of the system

Equipment brands to use propane

There are many different equipment to choose to adapt our car to consume propane, probably the most important factor to choose the installation of one or the other equipment, is the experience of the installer workshop with the equipment

Normally the propane installations carried out in the United States have a guarantee of 2 years, 3 years in some cases (contact the distributor for more information). This guarantee is provided by the manufacturer brand and usually covers the possible affected parts, that is, the combustion chamber, valves, cylinders, ... which will be the only thing that can be in contact with the propane

Autonomy of a car with propane

A little history about the use of propane in Automotive

The first mention of the mixture of propane and butane dates from 1910. It was then that Walter O. Snelling, an American chemist who investigated the properties of gasoline, separated gaseous fractions of the liquid, discovering the existence of propane.

The story tells that the owner of a Ford Model T asked Dr. Walter O. Snelling, chemist and explosives expert from the US Bureau of Mines UU. Why half the gasoline disappeared I had bought before I got home. He poured gasoline into a jug and plugged it in, observing After a while, the cork went off like a bottle of champagne.

In 1928, LPG was used for the first time as a motor fuel (in a truck) In the following years, the demand for autogas was driven by the popularity of airships, who traveled regularly between Europe and the US. The blimps of the last generation of the Zeppelin series were powered by engines powered by the so-called Blau gas (invented by Herman Blau), in itself very similar to butane, one of the ingredients of LPG.

In the 70s, Toyota began to market a monofuel propane vehicle keeping in the market in countries like Australia that had enough supply network.

Octane Index : Rectangular Octane Index for LPG is around 95 octane, similar to that of conventional gasoline.

Storage Temperature : Storage temperature is less than 0 degrees, which together with the small pressure required results in a large amount of energy stored in a small volume . 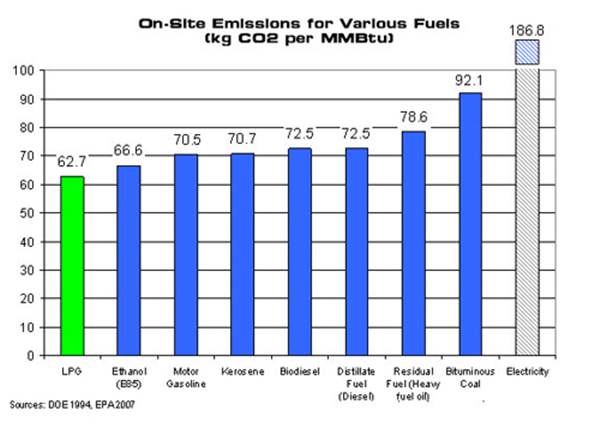 NOx particle emissions : In tests conducted at the Center Technological of Repsol in a Volkswagen Golf TSI of direct injection Bi-fuel that counted on the possibility of function with gasoline and lpg alternatively, the results showed an emission of particles that reduced the permitted limit emissions by 78%

CO2 emissions : In the same experience it was possible to verify that CO2 emissions were reduced by 20.8% with respect to the established limit and 14.7% on gasoline emissions.

Safety in the use of LPG as fuel

In 2008, the Real Automovil Club de España carried out the study "LPG, an alternative to traditional fuels "in which, using LPG as a fuel, tests are included for accident conditions and intrinsic safety of the LPG system. 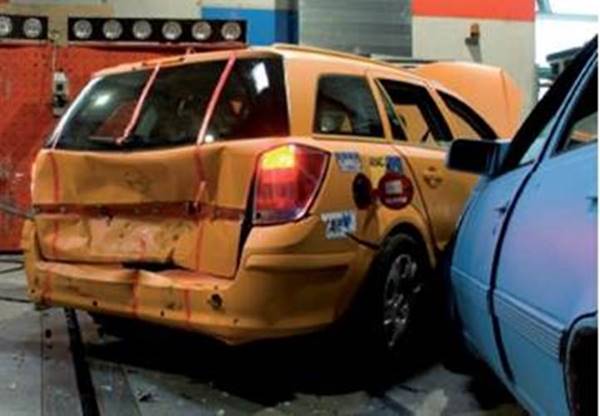 The test was conducted in accordance with the US FMVSS standard 301, used to evaluate the integrity of the deposit of fuel in normal gasoline or diesel vehicles. This report can be consulted at:http://www.glpautogas.info/normativaglpautogas.html . As a summary, several sections of this report are literally transcribed.

In the test in which the RACE participated, an Opel Kadett, of 1360 kg of weight, hit at 60 k.p.h. with 70% of overlay against a parked LPG Astra. This is the typical composition in rear collisions, p. in the end of a traffic jam, when the shocking vehicle driver tries to turn late toward the left.

Result of the crash test:

The propane deposit has not been affected by the shock loads. The deposit, including the supports and the feeding tube system, has resisted intact the test and do not represent any additional risk. We can conclude that the Autogas system does not involve any risk additional. 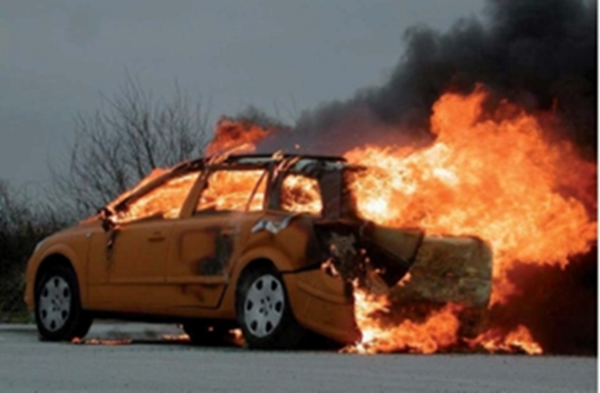 Vehicle burning is a relatively rare occurrence, but its effects can be devastating. The fire test carried out after the crash test aims to demonstrate whether the mandatory protection devices are sufficient and if They work even after a collision.

Before the test, the gas tank was charged with LPG until the valve closing interrupted the process (full tank with gas up to 80% capacity).

Result in the fire test:

In the fire test, the LPG conversion kit resists without representing any additional risk to the passengers of the vehicle or rescuers. The deposit does not exploit in any case, since the obligatory protection devices guarantee the controlled combustion of Autogas in the tank for a period of approximately 6 minutes. The test reveals that, even if the fire occurs directly below the Autogas tank, the relief valve pressure is opened only when the flames have enveloped the vehicle completely. The fire flame resulting from the controlled gas exit is directed towards the ground and does not involve a risk to nobody. The Autogas deposit resists intact the proof. By letting the lpg out and burning it instantly, the Pressure relief valve prevented the bursting of the reservoir subjected to an increase in internal pressure.

In the fire test, the Autogas conversion kit resists without represent no additional risk to passengers of the vehicle or rescuers. The deposit does not explode, since the mandatory protection devices guarantee the controlled combustion of propane in the tank during a approximately 6 minutes.