stations in germany with

Hydrogen Stations in germany in

Hydrogen Stations in germany in 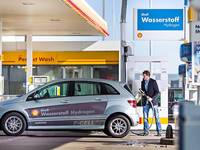 In Germany, hydrogen refuelling stations are coordinated, built and operated by a consortium of different companies. The partners: Air Liquide, Daimler, Linde, OMV, Shell and TOTAL will ensure an initial basic supply with around 100 hydrogen stations. From this point on, further stations will be installed wherever a demand for commercial vehicles can be expected in the short term and where a public filling station for a growing network of filling stations also for passenger cars seems to make sense.

As part of the project, hydrogen stations are being built in Hamburg, Lower Saxony, Brandenburg, Saxony-Anhalt, North Rhine-Westphalia, Hesse, Baden-Württemberg, Rhineland-Palatinate and Bavaria.

Some of the participants have already been involved in the field of hydrogen mobility for several years. In 2009, OMV opened the first publicly accessible hydrogen filling station in Baden-Württemberg.

There are currently 91 hydrogen filling stations in Germany.

Only Asia has a better expansion. In 2021 alone, more than 130 new hydrogen filling stations were opened in Japan, South Korea and China.

Anyone who drives a fuel cell vehicle in North America will likely find a gas station in California. Of the 74 stations spread across North America, 48 are located in the US state.

How is hydrogen refueling done in germany?