stations in switzerland with

Hydrogen Stations in switzerland in

Hydrogen Stations in switzerland in 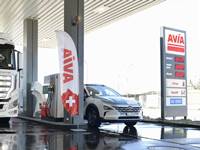 Electric engines play an important role in the car fleet of the future. Hydrogen fuel cell vehicles are an alternative to plug-in vehicles. Several suppliers already offer their services in Switzerland The Swiss government's aim is to diversify the fuel mix and thus help to reduce emissions. Hydrogen is perfect because fuel cell vehicles emit no exhaust fumes and offer many advantages.

Unlike neighbouring Germany, Switzerland does not yet have a large network of hydrogen filling stations. However, the Swiss government is involved in a number of initiatives to promote the use of hydrogen as a fuel, such as the Mobility H2 Switzerland partnership. The public hydrogen refuelling station infrastructure in Switzerland will be developed under the auspices of the partnership, in collaboration with other partners such as Emmi, Galliker Transport, Shell, Agrola and Migrol. The focus here is on the truck sector. In Germany, a similar project is already well advanced.

Hyundai's forty-six XCIENT fuel cell trucks delivered in Switzerland have collectively exceeded one million kilometres driven in just 11 months of service. During this period, more than 631 tonnes of CO2 emissions were avoided. The 25 Swiss companies that have joined together to form H2 Mobility Switzerland plan to acquire almost 150 more. The manufacturer, which is presenting its new version of the XCIENT, intends to build on this full-scale experiment to reach its sales target of 110,000 hydrogen-powered trucks by 2025.

In Switzerland there are 8 hydrogen filling stations open to the public. There are also other stations for private use

September 27, 2021. The Swiss start-up company "H2 Energy Solutions GmbH", founded in August, wants to make a significant contribution to reducing CO2 emissions caused by road traffic by building an infrastructure of filling stations throughout Switzerland for refueling hydrogen cars and trucks. As a fuel, hydrogen contains three times more energy than fuels made from fossil fuels such as gasoline or diesel. Hydrogen has great potential, especially for the transport sector. Because hydrogen powered vehicles only emit water vapor instead of CO2.

In Switzerland there are currently around 6 million vehicles that refuel with traditional fuel at one of around 3,550 public service stations. There are currently only a few hydrogen filling stations in this country, which also only cover a certain region of Switzerland. Car dealer Toyota intends to sell 1,600 of its “Mirai Fuel Cell” hydrogen model in Switzerland. But this requires a network of filling stations throughout Switzerland to refuel with hydrogen. Hydrogen, which is obtained from water by electrolysis, is compressed and can be stored or transported in this way.

How is hydrogen refueling done in switzerland?