stations in UK United Kingdom with 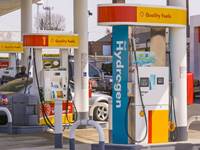 The results of a four-year test of hydrogen cars on UK roads were recently released, and the feedback was virtually all positive. Drivers loved the quiet ride, performance and reliability. The only real complaint was the lack of fully publicly accessible refuelling stations in Britain.

The conclusion of the project was clear: without filling stations, few people would be willing to buy the cars. But without the cars, who will build the filling stations? It's a similar situation to the one the car industry faced five years ago with electric vehicles. But this time the solution is not going to be as simple as planting a few poles on pavements at the cost of a few thousand pounds. Hydrogen refuelling stations are much more expensive.

A government and industry forecast estimated there would be 65 refuelling stations in Britain by 2020, a plan that has not been met, concentrated in the busiest parts of the country. This would make long-distance travel on common routes possible, although it was also claimed that for complete coverage of Britain, 1,000 filling stations would be needed.

The government is trying to ease the situation with meagre contributions such as ITM Power, which received £3.59 million in grants, including £1.89 million from the government, to build and run two new stations in London. Others already in operation include one at Heathrow airport and another in a Sainsbury's car park in Hendon, north London, which opened in March. The two existing service stations are operated by a company called Air Products. Technically they are open to the public, but owners must create an account, receive training and obtain an access code. Each month they will receive a bill for the fuel used.

In Britain there are 14 hydrogen filling stations open to the public, 1 more in Ulster.

As part of the Tee Valley Hydrogen Transportation Center, the airport, along with other key organizations, is testing zero-emission commercial and support vehicles.

To support the work, Element 2 has commissioned the refueling station to supply fuel to 10 Toyota Mirai hydrogen fuel cell vehicles, supplied by Enterprise Rent-A-Car and equipped with car club telematics. This is in addition to a forklift that has recently arrived at the facility, and a Renault Kangoo hydrogen light van and a hydrogen tug due to arrive in May.

How is hydrogen refueling done in UK United Kingdom?