stations in italy with

Hydrogen Stations in italy in

Hydrogen Stations in italy in 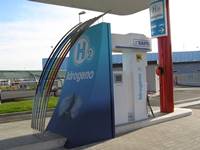 Alternative hydrogen mobility includes vehicle types that are far from common use, such as material handling, also called industrial logistics. This represents a considerable proportion of the industrial vehicles in use today in which hydrogen can play an important role. The adoption of hydrogen vehicles in the materials handling sector in Europe and Italy is less developed than in other countries such as the United States or Japan. Since 2017, hydrogen-powered forklifts. However, demand is increasing and can be strengthened with adequate programs to encourage the replacement of obsolete and polluting vehicles.

Prior to this, incentives for the creation of hydrogen generators/distributors using renewable energies are essential for the development of alternative fuel cell mobility, as well as funds to stimulate technological innovation in the sector. This would allow the creation not only of a market, but also of a competitive production system capable of responding to domestic and foreign demand, with the consequent improvement of the Italian trade balance and the creation of skilled jobs. A development in this direction would make it possible to reduce imports of electricity and fossil fuels imports of electricity and fossil fuels, ensuring lower integration costs and an optimization of the energy system capable of contributing to the long-term achievement of the Lisbon objectives. and declared by Italy at international level. The technology must also be made known to both the population and the productive sector to facilitate its diffusion.

The definition of national targets for the development of hydrogen mobility in Italy, elaborated in this "National Development Plan", is based on specific criteria and detailed analytical modeling extending to 12/31/2050.

Summarizing the main conclusions of the plan, it is foreseen that the sales scenario in Italy for FCEV cars could reach a stock of about 27,000 units in 2025. For buses, it is a stock of about 1,100 units by 2025. For heavy mobility, it is planned to reach a vehicle stock of just under 2,000 units by 2030 and a replacement of 29% of the vehicle stock by 2050 (about 50,000 vehicles). The passenger transport scenario in the rail sector foresees the introduction of hydrogen in about 20 units by 2025, which will mean the replacement of 100 diesel locomotives in 2050 (about 50,000 vehicles). diesel locomotives on non-electrified routes by 2050. It is expected that between 200 and 250 more locomotives will be replaced, which will make it possible to enable some incentive conditions in the near future, such as increased public subsidies and reduction of the cost of rolling stock through retrofitting or solutions compatible with bimodal service. As for the materials handling equipment market, a gradual introduction of hydrogen fuel systems is expected, with a stock of 2,750 vehicles by 2030 in the most conservative scenario.

To meet demand, 197 refueling stations will be built by 2025 (141 for cars and 56 for buses). to which must be added those needed for refueling of the rail equipment. The smaller stations will be built in the two initial phases (2020-2022 and 2023- 2023), serving small vehicle fleets. Captive fleets of up to 99 to 109 cars are expected in the first phase 2020-2022 and up to 10 to 2025. and up to 10-11 buses, with seasons of 50 kg/day and 200 kg/day respectively. By 2023-2025 captive fleets of up to 222-229 passenger cars and up to 29 buses, with stations of 100 kg/day and 200 kg/day respectively. The construction of small stations makes it possible to quickly reach a minimum coverage of the main transport routes (TEN-T) and major population centers, ensuring the subsequent transition to mass transit. After this initial phase, only large stations are planned, 500 kg/day for passenger cars (capable of supplying up to 1169 passenger cars/day). The stations are planned to be up to 1169 passenger cars/day in 2026) and 1,000 kg/day for buses (capable of supplying up to 60 buses/day in 2026). These are economically attractive for operators in the sector.

In Italy there are currently 6 service stations that offer the possibility of refuelling with hydrogen.

November 29, 2021. Snam, one of the world's leading energy infrastructure companies, is certainly convinced that hydrogen is the key to an environmentally sustainable future, and plans to install the first 2,700-kilometer hydrogen network from south to north in Italy by 2030.

This was stated by the company during the presentation of its Strategic Plan 2021-2025, which foresees an investment of 23,000 million euros to "turn Italy into a Mediterranean axis towards Europe."

Snam thus envisions the transition from a gas infrastructure company to an energy and green infrastructure company. This is the "Vision to 2030" of the Group, which presents its Strategic Plan 2021-2025. Investments will focus on transportation, storage and green projects on hydrogen and biomethane. Between 2021 and 2025, 8,100 million euros of investments are foreseen (700 million more than the previous plan until 2024).

How is hydrogen refueling done in italy?