stations in france with

Hydrogen Stations in france in

Hydrogen Stations in france in 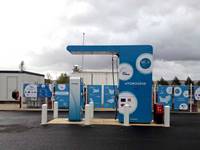 The hydrogen industry in France, still in its infancy, has a bright future in the coming years. The boosting plan announced by the French government foresees 7.2 billion euros of investment in this energy between now and 2030, including 2 billion in 2021 and 2022. The objective? To provide the national territory with a network of filling stations with sufficient hydrogen supplies to enable the use of hydrogen vehicles. This would involve the creation of refuelling stations associated with production and storage units to cover the hydrogen needs of road (cars, buses, coaches, trucks), maritime and rail transport.

The French hydrogen industry still faces many challenges to make the use of hydrogen fuel in heavy mobility profitable: more competitive prices, validation of fuel cell technologies for heavy-duty vehicles still at the prototype stage in several specialised manufacturers, etc.

With no pollutant or carbon dioxide emissions, hydrogen vehicles fit perfectly into the current ecological transition. They are thus exempt from the traffic restrictions that have been tightened over the years in France, as part of the energy renewal of fleets in circulation. Hydrogen-powered vehicles offer the same performance as their combustion counterparts, but are much quieter than their combustion counterparts. They therefore ensure quiet driving in urban areas.

As an indication, the average fuel consumption of a hydrogen engine in a light vehicle allows it to travel about 100 kilometres on 1 kilo of hydrogen with a range of between 600 and 800 kilometres, which would put it on a par with diesel-powered models.

In France, there are currently 29 hydrogen filling stations open to the public.

January 12, 2022. If the supply of hydrogen-powered vehicles is increasing, it should be easy to refuel. Apart from choosing a private hydrogen station, the public network strives to grow. After the first station in 2015, there will be 30 public stations by 2022, with another ten planned. Ten are in Normandy, six in the Paris region and six in the Lyon-Chambéry-Grenoble-Valence area.

If infrastructure is struggling to develop, it is because businesses and local authorities favor fully electric vehicles. However, the European Union has big ambitions for 2030. The European Commissioner for Transport, Adina Vălean, wants "a station at least every 150 kilometres". In this way, a goal of 60,000 trucks on the road would be achieved. France Hydrogen is targeting 300,000 cars and vans in its "Ambition 2030" scenario, as well as 5,000 trucks and buses.

How is hydrogen refueling done in france?