lng filling stations in belgium at 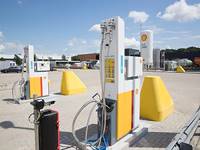 In the first six months of the year, the Belgian LNG market recorded a strong increase. "In terms of brands. It is no surprise that Iveco dominates the market, with Scania and Volvo exerting a very strong pressure, which leads to very good results. Scania and Volvo performing very well," he continues. In addition to the major truck brands, other suppliers are also entering the market. "In the last two years, retrofit manufacturers have retrofitted several vehicles with some success. Belgian companies are also offering quality improvements in converting engines to run on LNG.

One of the big advantages for the LNG market is the development of BioLNG. "In Belgium, we were a bit behind other countries," he said. "The first delivery point is from December 2018, and this year there will be one or two more sites, so there will be more volume available in the market. There are about fifteen projects planned for the next three years. This may not seem a lot, but for us it is a lot, considering that it is a start-up in the sector," he explains.

With the addition of new players, the network of LNG refueling stations in Belgium is set to grow rapidly. For example, one of the leading LNG companies in the Dutch market, Rolande, has just opened its first LNG station in Belgium. This deployment is part of the European BIOLNG4EU program. As a specialist in LNG transportation, Rolande continues to expand its European network. After opening its first LNG refueling station in Germany in July, the Dutch group is now tackling the Belgian market with a first facility in Antwerp.

How to fill up with LNG in belgium

How does a lng Liquid Natural Gas truck work?

Why should you be interested in Liquid Natural Gas lng?