HVO 100 Stations in Australia in

HVO 100 Stations in Australia in 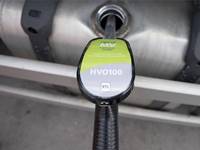 Inconsistent policy support in Australia has affected the uptake of HVO. Only Queensland and New South Wales have biofuels blending mandates, with limited success in meeting targets. In response, the New South Wales Government passed the Biofuels Amendment Act in 2016 which increases the accessibility of biofuels and aims for greater compliance with HVO blending in conventional Diesel.

Australia's reliance on heavy-duty vehicles and road transport logistics is a key opportunity for HVO in Australia. Renewable diesel is a direct replacement for petroleum-derived diesel, it is an interchangeable substitute, meaning it does not require retrofitting of the engine, fuel system or fuel distribution network.

In Australia the possibility to purchase HVO is only possible by filling up at filling stations but the sale is limited to blends with a percentage of HVO in the diesel, and not as pure HVO or HVO100.

Map of Stations with HVO in Australia

News about stations with HVO in Australia

The facility will adopt the Shell Renewable Refining Process which can introduce a wide range of animal fat, seed oil and residual fats as feedstock to produce high-quality renewable fuels. This advanced technology can process 100% of biobased feedstocks into cost-effective renewable diesel and sustainable aviation fuel with Shell's Hydrotreated Vegetable Oil (HVO) technology.

How to refuel HVO in Australia