HVO 100 Stations in Ireland in

HVO 100 Stations in Ireland in 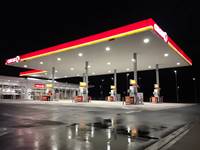 The Biofuel Obligation Scheme, introduced in 2010 in Ireland, requires fuel suppliers to ensure that biofuels account for a certain proportion of fuel used in the road transport sector. The scheme has been the main policy measure used to increase the share of renewable energy in the transport sector and has also contributed to the creation of a biofuels market. Progressive increases in the obligation rate, currently set at 10%, have led to increased use of biofuels.

One option for increasing the level of biofuel used in diesel vehicles is to use hydrotreated vegetable oil (HVO). This is a form of renewable diesel that can be used as a substitute fuel or in higher concentrations than B7 in diesel without technical problems. Internationally, the supply of HVO is limited and demand for this fuel is high. In order to encourage investment in the development and supply of this type of fuels, it is the Irish Government's stated intention to increase the use of HVO in Ireland's filling station network is important.

HVO has been produced in the past at Ireland's only refinery in Whitegate and could be produced again with appropriate investment. Some fuel companies have already used HVO in their diesel blends, which do not pose the blending problems and restrictions of other biofuels, so the sale of pure HVO, or HVO100, to the public appears to be close.

In Ireland there are companies using HVO100 although, for the time being, refuelling is done in private service stations with no possibility of sale to the public.

Map of Stations with HVO in Ireland

News about stations with HVO in Ireland

An Post's Galway Parcel and Mail Delivery Unit, where Ireland's first trial of HVO (Hydrotreated Vegetable Oil) for use in fleet fuel was launched in 2021 as fuel for An Post's heavy goods vehicles, Since September 2021, An Post trucks have driven more than 119,000km on HVO fuel, resulting in a 91.8% reduction in carbon emissions compared to diesel, with no performance hitches. An Post plans to extend this scheme to Waterford and Cork in 2022, retrofitting diesel fuel tanks and pumps as part of An Post's circular economy commitment.

How to refuel HVO in Ireland