HVO 100 Stations in Sweden in

HVO 100 Stations in Sweden in 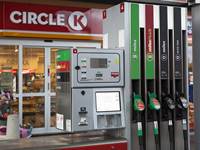 When HVO is produced from industrial and food waste the social benefit is very high, which is why the Swedish government has for some years now had a strong policy of supporting new, cleaner and more efficient forms of transport. Waste-based feedstocks are often more economically viable than, for example, crops, and the Swedish Government incentivizes their production by deducting both energy and carbon taxes by 100%, making HVO totally tax-free.

Under these conditions it is not surprising that several companies in Sweden have invested in HVO, in different ways. The company Preem has rebuilt its plant in Gothenburg to be able to blend HVO with fossil diesel and also introduced trucks with 100% HVO as fuel in its own production facilities. There is great potential for HVO to become a major transportation fuel in Sweden.

Research shows that extracting HVO from algae has a potential yield of at least 10-20 times compared to other crops, according to a recent study on renewable fuels and their conditions in northern Sweden.

Map of Stations with HVO in Sweden

News about stations with HVO in Sweden

June 27, 2022. Budbee's commitment to renewable fuel, HVO100, and without fossils has worked more than well. The company has collected greenhouse gas emissions and despite doubling deliveries in 2021, absolute emissions have been reduced by almost 2,000 tons of CO2e. This includes the entire supply chain, from pickup to the last mile.

The experience has been so favorable that it has served as an example for other companies in the sector.

How to refuel HVO in Sweden