stations in austria with

ethanol Stations in austria in 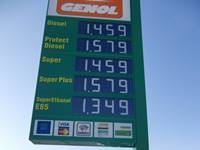 The Austrian Environment Minister, whose official vehicle runs on SuperEthanol, personally filled the first tank at the new E85 pump. The Austrian minister welcomes an environmental commitment like that of the filling station operators AWI and Genol: "Especially in the transport sector, great joint efforts are still necessary to achieve climate targets. Conversion to alternative propulsion systems plays a key role in this regard. To accelerate this, we are promoting the conversion of vehicle fleets and recently also the construction or conversion of filling stations for alternative fuels.

"AWI is convinced of the future of bioethanol as an environmentally friendly fuel. After all, every litre of domestic bioethanol consumed instead of a litre of petrol saves around 50% of CO2 emissions. "

AGRANA, Austria's only industrial bioethanol producer, has supported the conversion of filling stations to SuperEthanol E85 pumps even before the federal environmental subsidy came into force and will continue to use the funds available for this purpose to expand the distribution of SuperEthanol. AGRANA, together with the entire Raiffeisen Group, has also decided to convert its fleet of company cars to SuperEthanol. "In addition to expanding the network of SuperEthanol E85 filling stations and promoting SuperEthanol-compatible vehicles in public procurement, Austria must not lose sight of increasing the targets for blending bioethanol with petrol for ecological reasons," said the AGRANA CEO at the inauguration. He recalled that France has recently supported the promotion of biogenic fuels with the introduction of the additional E10 gasoline (super gasoline with 10% bioethanol) and that the French oil industry voluntarily joined this measure. "The advantages of bioethanol are not limited to the reduction of CO2 emissions. Bioethanol also makes it possible to use surplus grain of inferior quality and therefore unsuitable for the food industry," says Marihart.

SuperEthanol E85 consists of up to 85% bioethanol and the rest petrol. The bioethanol content is produced at AGRANA's bioethanol plant in Pischelsdorf, Lower Austria, from the domestic renewable raw materials wheat and corn. The flex-fuel vehicles (FFVs) can be fuelled with both superethanol and gasoline, as they are equipped with a sensor that measures the respective blend ratio of bioethanol and supergasoline and adjusts the vehicle electronics accordingly.

Flex-fuel vehicles (FFVs) are equipped with a sensor that measures the respective blend ratio of bioethanol and supergasoline and adjusts the vehicle electronics accordingly.

In Austria there are 33 filling stations offering ethanol, e85 or e100 supply.

News about Ethanol Service Stations in the austria

With the first trial delivery of advanced bioethanol, OMV, the Vienna-based integrated international oil, gas and petrochemical company, and AustroCel Hallein GmbH begin their long-term cooperation. The Hallein bioethanol plant has an annual capacity of up to 35 million litres, making it the largest wood-based bioethanol plant in the world. In the first year, AustroCel Hallein will already supply OMV with more than 1.5 million liters of second-generation bioethanol per month. The cooperation partners thus contribute to climate protection.

How to refuel ethanol in austria