stations in hungary with

ethanol Stations in hungary in 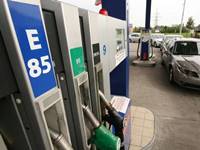 The sale of e85 ethanol started in Hungary in September 2007. With more than 400 pumps throughout the country, the evolution has not been as expected, especially following the cancellation of the tax subsidies from which it benefited at the beginning of the year.

However, this downward trend changed in 2018 with the approval by the European Union of the mandatory introduction of renewable fuels in the energy mix of transport and the identification of the different fuels with the maximum limit of ethanol they could carry.

This has led brands such as Avia to redouble their commitment to this fuel, in which they have extensive experience in other countries, and public interest has increased due to the limitations imposed by the European Union and its CO2 emission reduction targets.

The ethical objection that it is a waste of food to make fuel when people in some parts of the world are starving is valid. The answer to this doubt is the so-called second-generation bioethanol, which is not made from the crop itself, but from the stems and leaves of the plant, which are waste anyway. The conversion could also be profitable, as E85 in Hungary costs 217 forints per liter and gasoline about 320 forints. This difference of 100 forints has been observed for a long time.

News about Ethanol Service Stations in the hungary

October 11, 2021. An investment of one billion euros: the new bioethanol plant in Dunaföldvár is inaugurated.

The new Pannonia Bio Zrt plant was inaugurated on Friday. in Dunaföldvár, which mainly produces bioethanol. At the opening ceremony, Ferenc Hódos, the company's strategic director, said that the Pannonia Grow facilities were built as part of the company's three-year development plan, which began in 2020, with an investment of HUF 3.5 billion. , using own funds and market banks.

Hungarian plants account for 17% of European consumption, which means that maize produced in Hungary can be exported with added value. As of 2020, Hungary has seamlessly introduced E10 gasoline, which contains up to 10% ethanol, which that supports climate protection and national agriculture. János Süli, Minister without Portfolio responsible for the expansion of the Paks nuclear power plant and MP for the region, said that 330 kilometers of roads are being improved and 60 kilometers of new roads are being built in the Paks region, and that the region it is increasingly attractive to investors thanks to the development of infrastructures.

How to refuel ethanol in hungary