stations in germany with

ethanol Stations in germany in 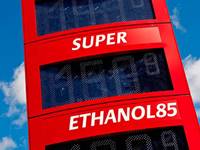 Diesel and gasoline are not the only fuels available on the German market: alternative fuels are becoming increasingly important. Not only do they protect the environment and make us independent of limited oil resources, but in many cases they are also inexpensive.

One of the alternative fuels is bioethanol, which is often sold in Germany as E85. But what does "E85" mean for bioethanol? Which cars can run on ethanol? What is an FFV? Where can I buy bioethanol at gas stations? How is bioethanol produced? These and other questions are answered in this guide.

At least in Germany, bioethanol is not usually offered in pure form with 100% ethanol at the pump. At German gas stations, ethanol is only available in so-called "blended" form, i.e. as a mixture. A certain amount of bioethanol is added to normal premium gasoline.

These blends are marked with the letter "E" and a number. This number indicates the percentage of ethanol added to the gasoline. Probably the best known is E10, a premium gasoline with ten percent bioethanol added. This fuel can be used in about 90% of gasoline engines without any problem.

Thus, E85 contains 85% bioethanol and 15% gasoline. However, unlike E10, E85 cannot be refueled in all vehicles without great effort. The vehicle must be suitable for running on E85.

There are currently 336 filling stations in Germany supplying e85 or e100 ethanol.

News about Ethanol Service Stations in the germany

January 3, 2022. The production of biofuels contributes to saving 13 million tons of CO2

Despite all the criticism: Biofuels in gasoline and diesel help Germany save some 13.2 million tons of CO2 equivalent. This represents a significant increase of 36% or 3.5 million tons compared to 2019, according to the Federal Agency for Food and Agriculture (BLE).

How to refuel ethanol in germany