stations in netherlands with

ethanol Stations in netherlands in 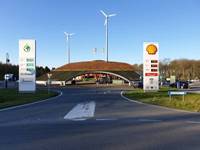 Engineers are searching hard for alternatives to petrol and diesel, and they are looking in particular to biofuels: ethanol and vegetable diesel. This search is nothing new; on the contrary, it has been going on for over a hundred years. Depending on supply, cars have run on gas, electricity, oil, coal, wood and even peat.

It was a Dutchman who invented the combustion engine. In the 17th century. The fuel he used was... gunpowder. Christiaan Huygens invented his engine in 1673 for Louis XIV to make his fountains gush in the gardens of Versailles. It was a cylinder with a suspended piston, in which a little gunpowder was detonated at the bottom. A real explosion engine, in other words.

Today in the Netherlands both e85 ethanol and the various alternative fuels are being promoted for their environmental qualities, as well as their increasingly competitive price

The development of ethanol consumption in the Netherlands has not been the most advanced but its implementation is still likely in the short term with a network of filling stations already supplying this fuel.

In the Netherlands there are 14 filling stations offering e85.

News about Ethanol Service Stations in the netherlands

May 27, 2021. An attached report forecasts the Netherlands' ethanol consumption to be 380 million liters in 2020, a level unchanged from the previous year. A separate report explains that in 2018 the Dutch government decided to increase the biofuel blending mandate in transport fuels in order to reach the global renewable energy consumption target of 14% by 2020. The 2020 mandate is 16.4% by energy content, of which 1% must come from advanced biofuels.

From October 1, 2019, Dutch dealers are obliged to offer E10 at their petrol stations. At least half of the blends offered must be E10

How to refuel ethanol in netherlands