stations in india with

ethanol Stations in india in 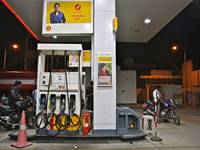 After soliciting input from relevant ministries and associations, analyzing progressive demand and supply projections, the challenges of manufacturing vehicles with E20 and the infrastructure of the The committee suggests a gradual deployment of E20 ethanol in the country to achieve the target by 2025. In the meantime, the deployment plan suggests all-India availability of E10 from April 2025. E10 from April 2022 as a fuel to meet the demand of existing vehicles until April 2025. April 2025.

When E20 is used, there is an estimated 6-7% loss of fuel efficiency for 4-wheelers that are originally designed for E0 and calibrated for E10, 3-4% for 2-wheeled vehicles designed for E0 and E10-calibrated 2-wheelers, and 1-2% for 4-wheelers designed for E10 and calibrated for E20. reported that, with engine modifications (hardware and tuning), the efficiency loss due to mixed fuel can be reduced. efficiency loss due to fuel blending can be reduced. To compensate consumers for the loss of efficiency due to ethanol blending of ethanol-blended fuels. of ethanol-blended fuels, tax incentives could be considered for E10 and E20 fuels.

News about Ethanol Service Stations in the india

June 5, 2021. Prime Minister Narendra Modi launched the E-100 pilot project on Saturday in Pune on the occasion of World Environment Day. The ambitious project aims to create an ethanol production and distribution network throughout the country.

In his intervention, Prime Minister Modi said that India has taken a new leap by publishing a detailed roadmap for the development of the ethanol sector. He said that ethanol has become one of India's top priorities in the 21st century and the focus on ethanol is having a better impact on the environment as well as the lives of farmers.

How to refuel ethanol in india