stations in switzerland with

ethanol Stations in switzerland in 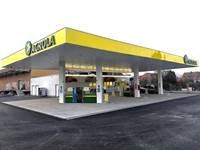 Bioethanol has arrived in Switzerland. In 2006 the first bioethanol filling station was opened in Winterthur (ZH). However, the future of this "clean" fuel is still uncertain: environmental organisations are not entirely convinced and tax exemptions have not yet been decided. On 20 July 2006, the first dispenser of bioethanol E85, an ethyl alcohol produced by fermentation and distillation of various plant-based raw materials, was inaugurated in Winterthur. It is enriched with 15% of traditional petrol, hence the name "E85".

Three partners dared to embark on "this new era", in their own words: Agrola, which operates filling stations mainly for agriculture, Alcosuisse, a division of the Swiss Alcohol Board, and the Swedish car manufacturer Saab. At present, only a few hundred vehicles with ad hoc compatible engines are on the road in Switzerland. They cost about CHF 1,000 more than models in a comparable category.

In addition to Saab, Ford also plans to import models that can run on E85 petrol. Those behind the project are convinced that other brands will follow. Bioethanol currently costs 20 per cent less than regular petrol. Agrola intends to maintain this advantage in the future. Within a year, some fifteen more filling stations should be opened.

At present, Switzerland cannot produce enough bioethanol on its own. It must therefore import the raw material from abroad. For many farmers, who are facing painful agricultural policy reforms, this market could open up new opportunities. According to studies, bioethanol could cover up to 20 per cent of the country's petrol needs.

In Switzerland there are currently 29 filling stations offering e85 ethanol for sale.

News about Ethanol Service Stations in the switzerland

October 5, 2021. When buying a new vehicle, the criteria for choosing the energy to use may take into account the purchase price, the cost of use, ease of use or the global ecological aspect of the solution planned. Each of them stands out in one or another of these criteria, but only one is currently among the best in each case: bioethanol. A renewable fuel that meets the needs of a wide range of profiles.

Regarding CO2 emissions, the reduction is calculated over the entire cycle, from production to ethanol combustion. Exhaust emissions are, on the one hand, roughly equivalent to those of unleaded gasoline, despite the higher volume of fuel used. And second, before harvesting the raw materials for manufacturing, they absorb CO2 through photosynthesis in the fields. According to the organization ePURE, the use of renewable ethanol in Europe led to a 75.5% reduction in greenhouse gas emissions in 2020 compared to the use of fossil fuel.

How to refuel ethanol in switzerland