CNG filling stations in sweden in 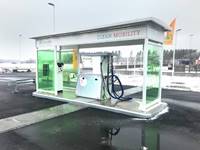 County administrative boards in Sweden have been commissioned by the Swedish government to develop regional infrastructure plans for renewable fuels. The aim of the plans are to promote and coordinate the proper deployment of CNG refuelling station infrastructure and thus enable the transition to renewable fuels.

Sweden's long-term climate goal is to have no net emissions of greenhouse gases to the to the atmosphere by 2045, and to achieve negative emissions thereafter. For domestic transport (excluding domestic flights), the current target is to reduce carbon dioxide emissions by 70% compared to 2010.

To achieve this reduction in pollutant emissions and the ambitious targets for 2045, it is inevitable to plan a refuelling structure for compressed natural gas that makes it possible to use it throughout Sweden.

And so in Sweden there are currently 211 CNG refuelling stations open to the public.

May 26, 2021. The Government has presented a proposal on how the EU directive on clean and efficient cars will be applied in Sweden. Under the proposal, the definition of what counts as a green car would change from the beginning of the year, and in the new definition, cars that can be built on gas would no longer count as green cars. This is reported by Swedish Radio.

This would affect the road tax on gas cars, and they would no longer be an option in public contracts. However, the proposal has been criticized, including by the Green Car Association.

"It is very difficult to understand the sense of canceling gas cars. The gas in vehicles that are filled in Sweden is made up of 95% biogas. Most of it is produced in Sweden. Few, if any, question the benefits of biogas for sustainability and the climate," writes Per Östborn of Gröna Bilister in a blog post.

How to refuel a CNG vehicle in sweden