CNG filling stations in switzerland in 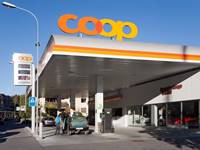 Natural gas began to be used in mobility in Switzerland in 2002, with petrol vehicles converted to gas by adapting the engines for CNG use, a tank in the boot and a hole in the bodywork to allow the filler neck to pass outside.

As early as 2006, models already equipped for the use of natural gas and petrol at the same time, produced in particular by Volvo, and Fiat, which is very familiar with CNG mobility, arrived on the Swiss market. Despite the fears of some motorists about the use of compressed natural gas in their vehicles, 2007 saw a peak in sales of this type of vehicle: some 2,500 new registrations in Switzerland that year.

The following year, sales began to fall, due to the announced arrival of electric models, and in 2012 a low point was reached, with only 800 new registrations, before an upturn that is still continuing. Today, there are between 12,000 and 13,000 CNG-powered vehicles on the road in Switzerland, of which around 80% are passenger cars that are also used in businesses. In the last 4-5 years there has been a real technological improvement, thanks to turbocharged engines.

The network of NGV refuelling stations in Switzerland is extensive and widely distributed, making it easy to refuel in the country. They are not dedicated stations. The gas companies rent sites at classic filling stations and negotiate their operating conditions with the oil companies, after taking charge of the refuelling equipment and transporting the gas to the pumps. As there are few trucks running on CNG, the nozzles of the nozzles - NGV1 - are adapted to light vehicles. As a result, it takes longer than in France to fill the tanks of lorries crossing Switzerland, with regular requests from foreign hauliers concerned about how they will be able to refuel their heavy goods vehicles.

The average distance between two CNG filling stations in Switzerland is generally around 15 kilometres. The reality on the ground is somewhat different. In rural areas the distance to a filling station is at most a hundred kilometres, but there are six stations in Geneva, three in Lausanne, six or seven in Bern and several in Zurich. Even a distance of 100 kilometres between two stations is not an impediment for vehicles with a range of 350 to 400 kilometres on gas and the same on petrol. It is in the most densely populated areas that we find the maximum number of stations supplying natural gas, as well as those distributing more traditional fuels.

And so in Switzerland there are currently 153 CNG filling stations open to the public.

GEG currently operates five stations: two in Grenoble, one in Sassenage, one in La Tronche and now one in Saint-Egrève. They all distribute CNG and BioGNV. La Tronche and Saint-Egrève stations are accessible to all types of vehicles: light vehicles, heavy vehicles, household waste collection vehicles and coaches; those in Grenoble (Esclangon, Balzac) are only open to vehicles and light commercial vehicles, and the one in Sassenage is dedicated to Smmag (Grenobloise Air Mobility Joint Union) buses. More than 500 clean vehicles, as well as 160 buses, circulate daily in the urban area of ​​Grenoble, 125 of which belong to Smmag.

How to refuel a CNG vehicle in switzerland