CNG filling stations in hungary in 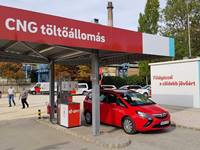 A key element of sustainable development in Hungary is the development of g-mobility, compressed natural gas (CNG), which is another way to contribute to meeting national and EU climate and environmental targets, as the Hungarian government has been supporting the expansion of alternative transport in Hungary for ten years, as well as the development of the necessary infrastructure and services.

In 2008, the Budapest Gas Works Ltd. (FŐGÁZ), acquired two CNG vehicles which became the first registered in Hungary with this fuel which is among the most environmentally friendly means of transport for its operation, the company launched a pilot project for the operation of a slow refuelling facility for natural gas fuel becoming the first CNG refuelling point in Hungary.

In June of that year, Mobiliti's predecessor, FŐGÁZ CNG Kft, a wholly owned subsidiary of FŐGÁZ, was established. The aim was to promote natural gas as a fuel and to develop the infrastructure of CNG refuelling points. It did not take long for the first public CNG refuelling point to be installed in October 2011 in Budapest.

Subsequently, the Budapest City Council's purchase of 100 CNG buses cemented the position of CNG as an alternative fuel for the future

In January 2021, MVM Mobiliti Kft. established a joint venture with VOLÁNBUSZ Zrt. a member of the MÁV-Volán Group, to strengthen their cooperation and launch an ambitious project and exploit synergies in the green development of public transport, to increase the share of environmentally friendly vehicles and develop the necessary infrastructure to make CNG available to the public in Hungary.

As a result of these projects and the momentum generated from the public sector, there are currently 17 CNG refuelling stations open to the public in Hungary.

The Hungarian city of Kaposvár, located in the southwest of the country, has a new fleet of 40 new MAN compressed natural gas (CNG) buses. These vehicles will replace the old diesel buses of the city's public transport company, Kaposvári Tömegközlekedési Zrt (KTZ). The CNG filling station, currently operating privately, has been built in a very short time, and the tests have been carried out successfully this week after less than three months since the signing of the contract.

Two BRC compressors have been installed with a capacity to fill up to 1,500 Nm3/h, currently being the most powerful CNG station in the country. This record will pass to a new CNG station in Miskolc, northeast of Budapest, where less than a month later another more powerful compressor station will open. The station will also serve the new fleet of CNG buses in this city.

How to refuel a CNG vehicle in hungary