stations in hungary with

Hydrogen Stations in hungary in

Hydrogen Stations in hungary in 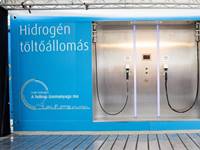 According to its national action plan, Hungary aims to integrate hydrogen into its mobility, industry, construction, gas and electricity systems. and energy. The NCEP states that "hydrogen can play an important role in integrating renewable electricity generation renewable electricity generation, strengthening the national security of supply and achieving Hungary's decarbonisation goals". New regulatory measures in the gas, storage and transport sectors that address the entire hydrogen value chain, encompassing generation, storage, transmission, distribution and distribution. covering generation, storage, transportation, distribution and end-use. Among the different applications, Hungary considers the possibility of using hydrogen to decarbonise its gas supply, produce electricity (in the long term), replace replace fossil fuels in the transport sector and partially replace fossil hydrogen with renewable hydrogen. Hydrogen will support the integration of higher volumes of variable renewable electricity into the system, improve system flexibility and increase security of supply. security of supply

The NECP includes the concrete 2030 target of a renewable electricity-based hydrogen consumption of 51ktoe in in the heating and cooling sector. Hungary also plans to use renewable hydrogen as an alternative fuel for transport, even in its Business As Usual scenario (considered as "with existing measures" scenario). With the additional measures of the NECP (WAM scenario), renewable hydrogen could cover around 1% of the total transport energy needs in 2030.

According to its NCP, Hungary considers that hydrogen fuel cell cars would be available and deployed from 2025, while fuel cell buses and heavy-duty vehicles could be used already. Even in its business-as-usual scenario, Hungary expects renewable hydrogen to play a role in the renewable energy target for transport. With the additional NECP measures additional measures, Hungary could cover around 1% of its transport needs with hydrogen in 2030, and around 5% in 2040 (for a total of around 5% in 2040). in 2040 (for a total of around 30% renewable energy for transport).

In Hungary there is 1 hydrogen filling station, albeit for private use.

In addition to the opening of the country's first hydrogen filling station, the first nationwide test drive of the Toyota Mirai second-generation hydrogen fuel cell car took place, and green hydrogen forklifts and a ship were introduced. Linde claims that it is the only company globally that covers the full spectrum of providing the entire hydrogen value chain, from production and processing, storage and distribution to everyday consumer and industrial use.

At the ceremony, the Minister of Innovation and Technology, László Palkovics, stressed that "Hungarian's future is national, high-tech and green. We consider acceptable those actions that serve the Hungarian interests in the long term, provide modern solutions and are sustainable not not only from an economic point of view, but also an environmental one. The Hungarian strategic vision for hydrogen plays a role in this framework, and the inauguration and trial operation of the first hydrogen filling station is an important step in its implementation. Today We are one step closer to our goal of making Hungary climate neutral by 2050."

How is hydrogen refueling done in hungary?