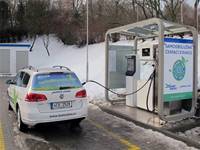 However, the implementation of CNG in the Czech Republic does not stop there, the first projects are also emerging that allow biomethane to be injected into the gas network to be used as a transport fuel. The development of biomethane production is also supported by the European Union, which considers it a sustainable local energy source. The Czech Republic is gradually preparing for further expansion of this technology by establishing more favourable technical and economic conditions for its producers. Biogas has long been used to produce electricity and heat. However, this medium can also make a significant contribution to the greening of the transport sector.

And so, in the Czech Republic there are currently 232 CNG filling stations open to the public. A number that is constantly growing.

June 11, 2021. The Liberec and Jablonec nad Nisou Transport Company has invested in the construction of its own compressed natural gas (CNG) filling station. The CZK 23 million project promises significant cost savings. It should save up to a third on fuel alone, with additional savings in terms of people's time and mileage, since Liberec buses have had to refuel at Jablonec so far.

Ten years ago, the transport company participated in the construction of the Jablonec service station with the BusLine company, which offered public transport in and around Jablonec. However, after its completion, the station was leased to a private company from which it buys the gas. The contracts concluded by the previous management of the transport company have a duration of 30 years and are extremely unfavorable for DPMLJ.

In recent years, the Liberec transport company has invested millions in modernizing its fleet. It currently has more than a hundred buses and almost forty percent of the buses are CNG-powered vehicles; Last year alone, the transport company bought ten new gas vehicles from the Polish company Solaris.

How to refuel a CNG vehicle in Czech Republic