CNG filling stations in belgium in 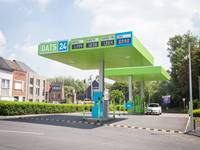 The main operator of stations in Belgium is Dats24 (Colruyt), followed in order by Pitpoint (Total40), Enora41 (a combination of G&V, Electrabel and Ideta), Q8 and GreenPoint Supplies (GPS).

There are currently 104 CNG filling stations open to the public in Belgium.

June 16, 2021. ENORA and its partners, Transports Fockedey and IVECO, together with the city of Leuze, have inaugurated the largest CNG distribution station in Belgium. It is located in the heart of the Leuze Europe business park. The ENORA CNG service station is capable of refueling 10 trucks per hour thanks to NGV2 technology.

The station is designed to meet the growing demand for natural gas in the freight transport sector and is the supply point for companies in the park that have a fleet of CNG-powered trucks.

The station is suitable for heavy vehicles and allows vehicles to be filled at a rate of 30 kg/min, which is four times faster than at a conventional service station.

How to refuel a CNG vehicle in belgium