CNG filling stations in portugal in 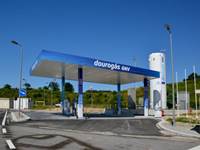 In recent years, Portugal has implemented an energy policy based on improving energy efficiency and promoting energy from renewable sources as a tool to tackle climate change, reduce external energy dependence and contribute to security of supply.

To this end, the Portuguese Government defines the minimum requirements for the deployment of alternative fuel infrastructures, including, among others, CNG refuelling stations, to be defined through the mandatory adoption of national policy frameworks, as well as common technical specifications for such refuelling points and information requirements for users.

Thus, this National Action Framework includes an assessment of the current situation and future evolution of the alternative fuels market in the transport sector in Portugal and the development of the planned infrastructures, taking into account, where appropriate, cross-border continuity, and will define national objectives and targets for the creation of such infrastructures, specifically in the field of natural gas, as well as the measures necessary to ensure their fulfilment.

The use of natural gas for vehicles, CNG, can offer both economic and environmental savings. The cost associated with natural gas is significantly lower than conventional fuels (diesel and petrol) and, due to its characteristics, it provides clean combustion. At the environmental level, compared to traditional fuels, the emissions associated with this alternative fuel are also lower. Thus, in recent years, a legal framework has been defined in Portugal to promote the use of natural gas as an alternative to conventional fuels in the transport sector.

The infrastructure for the supply of natural gas vehicles in Portugal is still under development. At the end of 2015, there were 6 CNG refuelling stations available to the public.

Today, the network of CNG refuelling stations in Portugal has developed and is growing steadily, although the number of refuelling points is still low compared to other European countries

Thus, there are currently 16 CNG refuelling stations open to the public in Portugal, with several dozen more in the pipeline.

The first heavy vehicle powered by biogas at the Dourogás CNG station is already circulating on Portuguese roads. The new offer of this biofuel is the result of the collaboration between Dourogás, Havi Logistics and Scania to decarbonise transport.

The first refueling of a heavy vehicle with vehicular natural gas of totally renewable origin was carried out at the Dourogás service station, in Santo António dos Cavaleiros (Loures). The vehicle is a Scania P340 truck, operated by Havi Logistics for the transport of food.

How to refuel a CNG vehicle in portugal