CNG filling stations in Brazil in 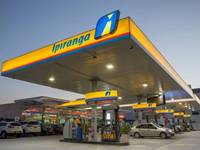 Natural gas was first used as a fuel in light vehicles in Brazil in 1996. This was the result of a new law extending this application, previously authorised only for metropolitan buses, to all types of vehicles. Starting slowly, the natural gas vehicle (NGV) industry has progressed to the point where close to one million vehicles are circulating on Brazilian roads, a remarkable figure in only 9 years. Most of these vehicles are aftermarket converted taxis or medium-duty commercial vehicles.

In some large metropolitan areas, such as Sao Paulo or Rio de Janeiro, the government has planned to promote programmes to replace diesel with natural gas in urban buses. Strategies are being developed to address issues such as technology, price differences with respect to diesel engines and fuel, taxation, and operating and maintenance practices currently in use, to make natural gas attractive to fleet operators. This is a niche that is expected to grow significantly in the coming years.

Another interesting project under discussion, to be developed in the southern cone of South America, is the "Blue Corridors". When implemented, they will interconnect cities such as Rio de Janeiro and Sao Paulo with Buenos Aires (Argentina), Montevideo (Uruguay) and Santiago (Chile). These corridors are routes where natural gas is or would be available to fuel natural gas vehicles and improve existing conditions to enhance export and import transactions and political integration between nations in that region.

Recently, with the help of new technologies developed and applied to deep ocean exploration, it has been possible to identify large gas reserves, close to the points of consumption. As a result, the natural gas distribution network is still under construction in most parts of the country. NGV refuelling stations have been a powerful feasibility tool to justify the construction of pipelines in areas that would otherwise not have been viable.

In Brazil there are currently 355 CNG refuelling stations open to the public.

March 23, 2022. The president of Gasmig announces that a district of Manhuaçu will have a gas station with natural gas

In the midst of the crisis caused by the war, filling the deposit with Compressed Natural Gas (CNG) can be more expensive in Minas Gerais. This is because the conflict can also contribute negatively in relation to fuel shortages.

However, the Minas Gerais Gas Company (Gasmig) guarantees that there will be no shortage of CNG in Minas, but the international situation may affect the prices charged in the country, which will be readjusted at the beginning of May. In an interview, the installation of a CNG station in Realeza, a district of Manhuaçu, was confirmed.

How to refuel a CNG vehicle in Brazil