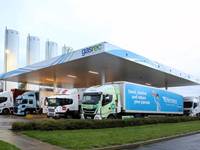 The UK has huge reserves of natural gas and a national distribution network that allows safe and easy access to these volumes of gas. Compressed natural gas - CNG - is natural gas extracted from the pipeline and compressed to a fraction of its volume, without losing any of its energy potential. CNG-fuelled trucks and buses can travel up to 350 miles between refuelling. CNG is an environmentally friendly and fundamentally economical fuel, which is currently best suited to the commercial vehicle sector; for example, local authority and private sector waste disposal vehicles, bus fleets and delivery trucks for large distribution chains.

The transport sector is the largest source of carbon dioxide emissions in the UK. In 2019 it accounted for 34% of the UK's total greenhouse gases, of which 4.5% was attributed to HGV operations specifically. The five refuelling stations currently operated by CNG Fuels offer a low-carbon, low-cost alternative fuel source for HGV operators looking to make the switch from diesel. It will expand its strategic network with 14 new refuelling stations across the UK over the next two years, responding to an increase in demand for renewable fuel from major brands and facilitating a significant reduction of over 80% in carbon emissions from operating fleets.

While the Government has committed to maintaining a clear advantage for gas vehicles until 2032, Bio-CNG will be favourably positioned in terms of fuel duty compared to diesel vehicles. This offers fleet operators a financial incentive to make the switch to CNG, gaining access to a fuel that is 35% to 40% cheaper.

There are currently 13 CNG filling stations in Britain open to the public.

September 15, 2021. Gasrec, one of the leading providers of fuel for commercial gas vehicles on UK roads, is expanding the supply of compressed natural gas (CNG) for trucks in the UK with the opening of a new service station at the Ocado Group Dordon Customer Fulfillment Center.

The new facility in Dordon is set to open in the second quarter of 2022 and will be designed and built by Gasrec to fuel the 10 CNG tractor units already running from the site and enable Dordon's remaining tractor fleet ( 70 in total) transition from diesel to blended biomethane, Gasrec announced.

The Dordon facility will be a tanker-fed operation, with Ocado signing a 10-year supply agreement with Gasrec. With 60 natural gas trucks operating from Hatfield and Dordon, this latest development will enable Ocado to double its total CNG units over the next three years, with more than two-thirds of its total fleet running on natural gas.

How to refuel a CNG vehicle in United Kingdom