CNG filling stations in italy in 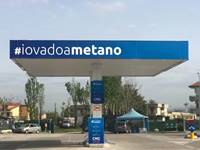 Thanks to a consolidated and cutting-edge technology, Italy is the first European market for natural gas vehicles, with more than one billion cubic metres consumed and about one million vehicles currently in circulation. The Italian Government believes in CNG as an alternative fuel for road transport and is promoting a series of initiatives to encourage the use of CNG on an even larger scale. Italy will invest around EUR 150 million over the next 5 years to facilitate the development of CNG refuelling plants. This will increase the number of existing methane gas refuelling stations, improve the quality of service and ensure a more balanced distribution of refuelling stations across the country.

Equipping Italy with natural gas infrastructure and technologies generates other positive outcomes: for example, it promotes biomethane, a fuel with a similar footprint to electricity. In particular, it can promote an increase in domestic gas production with positive effects on the agri-food sector, as biomethane is obtained from the processing of agricultural and agro-industrial by-products.

Further development of CNG for vehicle use will produce a direct benefit of €1.5 billion for natural gas technology produced in Italy and more than €1 billion in overall investment in infrastructure for the development of CNG refuelling stations, with significant benefits also for employment. Consumers will also enjoy overall savings estimated at up to €800 million over five years.

Gas mobility is a sector in which Italy is the absolute leader in Europe, with the most extensive infrastructure network on the entire continent and the largest number of gas cars and distributors supplying it. The sector has a total of 6,000 workshops and, between direct and indirect related industries, employs more than 50,000 workers.

Currently in Italy there are 1444 CNG refuelling stations open to the public.

July 8, 2021. The vehicular natural gas (NGV) refueling infrastructure in Italy this week reached the milestone of 1,500 stations following the inauguration of the first Snam4Mobility self-service distributor in the country.

Located in Verona, the latest Snam4Mobility site will allow motorists to refuel compressed natural gas (CNG) and biomethane (Bio-CNG) in full autonomy, 24 hours a day, according to a company statement.

The distributor, managed by Goldengas, will only supply alternative and ecological fuels, including advanced biomethane from the Snam plant in Albairate, in the province of Milan, obtained from organic waste. Biomethane will be available at the station in the coming months.

How to refuel a CNG vehicle in italy