CNG filling stations in Canada in 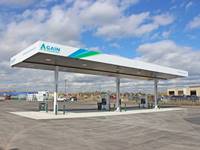 The Department of Natural Resources Canada announced an investment of 6 million Canadian dollars (4.8 million US dollars) for the installation of six compressed natural gas (CNG) refuelling stations along the Trans-Canada Highway. The new refuelling stations will be deployed evenly across Ontario.

This investment expands the number of natural gas stations along major federally funded freight corridors to 22.

These initiatives are part of Canada's strengthened climate plan, "A Healthy Environment and a Healthy Economy", which proposes to further accelerate the adoption of zero-emission vehicles (ZEVs) through an additional C$150m ($119.11mn) for infrastructure and C$287m ($227.89mn) for purchase incentives for Canadians.

There are currently 34 CNG fueling stations in Canada open to the public.

Clean Energy Fuels Corp., along with its industry partner Union Energy Solutions Limited Partnership, an Enbridge company, announced that it has entered into an agreement to fuel United Parcel Service (UPS) Canada's delivery fleet vehicles with compressed natural gas ( CNG) at its station in London, Ontario.

UPS Canada has converted 25 package delivery vans to run on CNG, a lower-carbon alternative to gasoline. The Clean Energy-operated CNG fueling station, located near the UPS facility in London, will provide some 2,000,000 liters (525,000 gallons of gasoline equivalent) of CNG in a multi-year deal. Fueling trucks with CNG will reduce 700 metric tons of greenhouse gas emissions, which is equivalent to planting 11,667 trees, taking 152 cars off the road and recycling 281 tons of landfill waste.

How to refuel a CNG vehicle in Canada