stations in portugal with

Hydrogen Stations in portugal in

Hydrogen Stations in portugal in 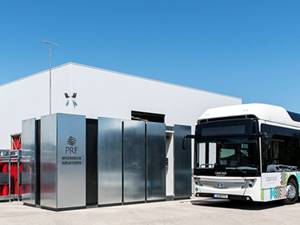 The Portuguese government wants between 50 and 100 hydrogen refuelling stations to be operational by 2030, according to the National Hydrogen Strategy (EN-H2), approved in July 2020.

Portugal, by taking on the goal of carbon neutrality by 2050, has committed to an ambitious energy transition process. This is the natural environment for the development of new business models and the relaunch of the economy, creating new opportunities for economic agents.

At a press conference after the end of that meeting, João Pedro Matos Fernandes said that "the public consultation showed that the chemical industry is the big customer for hydrogen", whose strategy foresees an investment of around seven billion euros, with the aim of gas representing 5% of final energy consumption by 2030.

To achieve carbon neutrality, as envisaged in the RNC2050, greenhouse gas emissions for Portugal were set to be reduced by 85-90% by 2050, compared to 2005, and the remaining emissions to be offset by carbon sequestration by land use and forests. The emissions reduction trajectory was set at between 45% and 55% by 2030, and between 65% and 75% by 2040, all relative to the values recorded in 2005.

In Portugal there is 1 hydrogen service station open to the public.

August 23, 2021. The new hydrogen filling station, also known as DRHYVE, currently supplies heavy and light vehicles at 350 bar and, in the near future, also light vehicles at a pressure of 700 bar. The system was installed in the city of Cascais, Portugal, and is currently intended to power two buses, also nationally manufactured (built by Caetano Bus) and a light vehicle.

According to Bruno Faustino, Director of the Hydrogen Business Unit, "PRF is already manufacturing the 2nd DRHYVE station and, although this station does not have its own production, we are already designing stations with its own hydrogen production and storage, making the systems totally autonomous.

Paulo Ferreira, Director of PRF, stated: "We are very pleased to have commissioned in Portugal the first of many DRHYVE stations (PHRS - portable hydrogen refueling station) that PRF will build. Hydrogen will play a very important role in mobility and in a short time we will have important fleets of vehicles with hydrogen fuel cells, and we are sure that the important role that PRF has in service stations for natural gas vehicles will also be played in hydrogen service stations .

How is hydrogen refueling done in portugal?