stations in brazil with

Hydrogen Stations in brazil in

Hydrogen Stations in brazil in 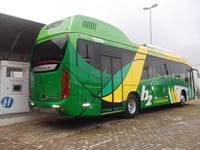 Bento Albuquerque, Brazil's Minister of Mines and Energy, said hydrogen is already one of the country's bets for the development of the "fuels of the future". According to him, the country has been studying the emerging source of electricity generation for 20 years, as well as maintaining international partnerships with Germany, Chile and other countries. He participated on Monday (31) in the Brazil 2021 Investment Forum.

Albuquerque said the so-called "green hydrogen", which does not involve the emission of polluting gases, should be encouraged by the government. He said a programme to develop "green hydrogen" in the country is due to be launched in June, which should lead to a first legal framework for this segment.

Hydrogen technology has been gaining ground recently in Brazil. However, in the mobility sector, it is still less widespread than battery electric buses. In a scenario of urgency for energy transition, instead of choosing one alternative, the way may lie in the combination of both.

An ambitious energy transition strategy aligned with major international climate goals and an understanding of the economic potential of new technologies can create production opportunities in places with abundant renewable resources capable of favouring hydrogen competitiveness, such as Brazil. This is the case of Brazil, which, with one of the most renewable electricity matrices in the world, could be a powerhouse in the production and export of green hydrogen.

One of the biggest drawbacks for those looking to buy a hydrogen vehicle today is the lack of an extensive refuelling network in Brazil. The current situation in much of the world is the lack of dedicated hydrogen refuelling stations. There are signs that this may change in the next few years, but it is currently an unquestionable problem for drivers.

Edson Orikassa, managing director of Toyota Brazil and president of the Brazilian Automotive Energy Association, has set a target of 800,000 vehicles and 900 hydrogen stations by 2030. The "big three", as Toyota, Nissan and Honda are known, have formed, with 11 other companies, H2 Mobility, which has developed a ten-year plan to build this infrastructure. The stations spread across Brazil will help spread hydrogen energy to consumers and reduce the price of fuel cell cars.

Approved by the National Energy Policy Council (CNPE) this month, the Future Fuel programme provides a signal to the market about the federal government's energy planning to decarbonise the transport sector. The CNPE last week approved the development of a national hydrogen programme. The assessment states that a "hydrogen rainbow" can be expected. "Brazil has no reason to choose a specific route. With natural gas production increasing, it makes all the sense in the world to have blue hydrogen. As we have wind and solar power, we have green hydrogen," he explained.

In Brazil there is currently one refuelling station supplying hydrogen, but for private use.

November 28, 2021. This week, Cummins is celebrating its 50th anniversary in Brazil and used the anniversary to announce the creation of a new business division. Known as New Power, the company's investment will drive the energy transition towards more sustainable sources, including electrification and hydrogen fuel cells.

With the acquisition of Hydrogenics in Canada, Cummins demonstrates that further investment is forthcoming with the use of hydrogen as a propulsion source for fuel cell vehicles.

To do this, it has launched a new line of fuel cell modules on the national market, which offers multiple possibilities that can be combined for a better adaptation to the client's project. From the company's point of view, the most economical scenario is that the carrier comes with an electrolyser that produces its own fuel and uses it in its fleet of vehicles.

How is hydrogen refueling done in brazil?