Hydrogen Stations in china in

Hydrogen Stations in china in 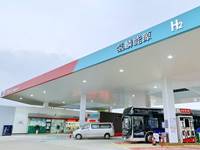 During the period of the "14th Five-Year Plan", Sinopec aims to build 1,000 hydrogen refueling stations to become the first hydrogen supplier for China's automobile industry. With the vision and goal of building a world-leading clean energy chemical enterprise, Sinopec has made every effort to build an industrial structure without relying on oil, and to comprehensively promote the construction of the entire hydrogen energy industrial chain.

Faced with the crisis of fossil energy depletion and the challenge of environmental problems, it is an inevitable trend of development to replace non-renewable fossil energies with new energies. Hydrogen energy has an important place in the future clean energy system. It has the advantages of wide sources, high calorific value, purity and non-pollution, various forms of use and large-scale stable storage. The automotive hydrogen energy industry chain mainly includes hydrogen production, hydrogen storage, hydrogen transportation and hydrogen refueling stations, etc.

The 14th five-year plan (2021-2025) ("five-year plan"), which was just launched recently, highlights hydrogen as an industry that China intends to promote. Even assuming that China has already promoted hydrogen technology or roadmaps nationwide, 16 provinces and cities have also issued five-year plans to complement hydrogen, especially the role of hydrogen.

For example, Beijing's five-year plan includes efforts to promote electric and smart cars and encourage the planning and development of hydrogen refueling stations. The goal is to have 2 million new energy vehicles (NEVs) in operation on Beijing's streets by 2025. Beijing can also plan to expand from 5 to 8 world-leading hydrogen companies from 2023, and plans to expand urban areas in the next 4 years. The hydrogen market has grown to as much as 100 billion yuan ($15.4 billion).

How to refuel hydrogen in china