Hydrogen Stations in finland in

Hydrogen Stations in finland in 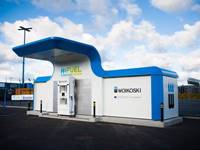 Finland's national target for road transport in 2050 is near-zero emissions. The program proposes that by 2030 all new cars sold in Finland be compatible with some form of alternative fuel such as hydrogen, and there should be about 20 hydrogen refueling points by 2030.

Among the 18 HyLAW partner countries and within the tripartite classification of 1) early adopters, 2) fast followers or 3) emerging countries in hydrogen technology deployment, Finland is considered a fast follower. Finland has a proactive history history in this field. Both research organizations and companies have been engaged in developing fuel cell applications and hydrogen utilization. A national research program (2007-2013) enabled a number of research and development projects between public and private actors, the development between public and private actors, technology development from component to application level, demonstrations, and valuable networking between public and private stakeholders. valuable networking among stakeholders at the international level.

A national hydrogen roadmap was published in 2013. It is mainly based on the opinions and views of researchers and experts working at the Technical Research Centre of Finland VTT Ltd. Since the research program, hydrogen and fuel cell development work has continued development work at universities, research centers and companies. Participation in, as well as coordination of coordination of EU projects funded by the Fuel Cells and Hydrogen Joint Undertaking has been active.

There are currently no hydrogen fueling stations in Finland.

February 28, 2020. Hydrogen fuel cell buses to be tested in Finland.

The Finnish city of Kerava is one of the few European cities that will test the use of electric buses powered by fuel cells.

Fuel cell buses are an interesting solution for public transport because they produce no carbon dioxide or particulate emissions and therefore have a low impact on the environment. The vehicles generate electricity from hydrogen, stored in high-pressure tanks, combined with oxygen from the air. This chemical reaction in the cells leaves only water and heat as by-products.

How to refuel hydrogen in finland