stations in spain with

Hydrogen Stations in spain in

Hydrogen Stations in spain in 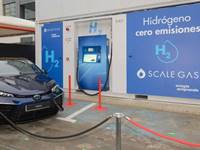 Hydrogen as a fuel is one of the alternatives currently being considered to replace petrol and diesel, especially in some countries in Europe and Asia, where cars powered by this gas are already in circulation. The circulation of hydrogen vehicles on Spanish roads will be a reality before the end of 2020, according to the forecast made by experts in the field during the conference "Hydrogen in transport: infrastructures and vehicles" organised by the Spanish Hydrogen Association (AeH2) within the framework of the Genera Fair held at IFEMA (Madrid).

European Union Directive 2014/94 obliged each member country to develop a National Action Framework for Alternative Energies in Transport by the end of 2016. Hydrogen has its own chapter in the Directive and, although the development of infrastructures for its refuelling (hydrogen plants) is optional, Spain has decided to consider it in the National Action Framework given the potential it represents for our country.

The network is still scarce in Spain, but implementation projects have already been presented.

In February 2021, Naturgy presented a project for the construction of 38 hydrogen refuelling stations (hydrogeneras) throughout Spain, which the company expects to have in place by 2025. In the second phase, the total infrastructure will reach 120 hydrogenerators.

The network of 38 hydrogen stations will be deployed throughout Spain, using the company's hydrogen production centres located in La Robla, Mirara, Valencia, Palos de la Frontera and Alcázar de San Juan. Of these 38 locations, six will be in Andalusia, five in Castilla y La Mancha, four in Castilla y León and Catalonia, three in the Community of Madrid, two in Galicia, Valencia, Murcia, Aragon, Navarre and Extremadura, and one each in the Balearic Islands, Asturias, Cantabria and the Basque Country.

The Council of Ministers, at the proposal of the Ministry for Ecological Transition and the Demographic Challenge (MITECO), approved in October 2020 the "Hydrogen Roadmap: a commitment to renewable hydrogen". With this plan, the Government is promoting the deployment of this sustainable energy vector, which will be key for Spain to achieve climate neutrality, with a 100% renewable electricity system, no later than 2050. The development of renewable hydrogen will encourage the creation of innovative industrial value chains in our country, technological knowledge and the generation of sustainable employment, contributing to the reactivation towards a green economy with high added value.

In terms of mobility, by 2030, a fleet of at least 150 buses; 5,000 light and heavy vehicles; and 2 lines of commercial trains powered by renewable hydrogen are proposed. Similarly, a network of at least 100 hydrogenerators and hydrogen-powered handling machinery should be implemented in the first 5 ports and airports.

In Spain there are currently 9 refuelling stations supplying hydrogen, although all of them do so privately.

December 13, 2021. Air Liquide and Redexis will deploy up to 100 hydrogen refueling stations in Spain before 2030

The network of hydrogen refueling stations would be strategically located in the main logistics centers, such as Madrid and Barcelona, as well as in the main transport corridors that link the country with Europe, the Mediterranean and Atlantic corridors.

This alliance will benefit from Air Liquide's more than 50 years of experience in the entire hydrogen value chain (production, storage, distribution and hydrogen technology) and Redexis' capabilities in the development of gas infrastructures for vehicles.

How is hydrogen refueling done in spain?